Continue to Site
You are here: Home / Lubrication / Oil-to-water conversion for stage-1 turbine 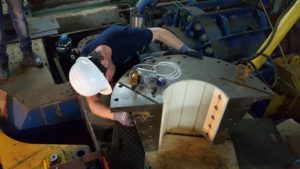 Thordon Bearings’ Global Service & Support division completed the bearing conversion of the 10MW Francis turbine in June 2018 together with Andritz Hydro, after the existing white metal bearing was damaged due to water ingress from a faulty shaft seal.

Through its regional distributor in India, Soneji Engineering, Thordon supplied a complete guide bearing package for the turbine’s 355mm (14-in.) diameter shaft. The scope of supply included an SXL guide bearing with tapered key set in a split stainless-steel housing, a SXL segmented radial shaft seal with split housing, a Thordon Water Quality Package (WQP) to deliver clean lubricating water to the bearing, and a comprehensive instrumentation package for monitoring bearing condition.

Greg Auger, Thordon Bearings’ Hydro Business Development Manager, provides a backdrop to the story: “We were initially approached in 2016 to replace a problematic oil-lubricated bearing with a water-lubricated system. After initial design discussion with the turbine engineers in France, we began working with the turbine manufacturer’s Indian office team to optimize the design, and the order was placed in January 2017 for the Thordon solution. Six months later we were able to ship the package to India for installation.”

But despite best laid plans, political strife, and port strikes in India meant the onward shipment to the remote site was delayed until November, 2017.

By the following January, 2018, project teams from Thordon GSS and Soneji Engineering, alongside engineering teams from the turbine manufacturer and plant operator, the bearing and seal was successfully installed and commissioned.

The Jaldhaka Stage-I hydropower plant, owned by the WBSEDCL and located in the Darjeeling District of West Bengal, northeast India, was fully modernized in 2017-2018.

The 28-month renovation work included the installation of new stators and poles and the electrical auxiliaries were refurbished. For the turbines and mechanical auxiliaries, new runners, MIV and governors were installed.

“The decision to replace problematic oil-lubricated guide bearings with water-lubricated ones, made complete sense following the recent investments WBSEDCL has made in the facility,” said Auger.

“Through our distributor Soneji Engineering, Andritz Hydro and WBSEDCLwere aware that Thordon had expertise converting turbine bearings to water lubricated designs, so we are obviously delighted to have put this expertise into tangible form with this project.”

The Stage-1 turbine began operations in March 2018 with the new water lubricated bearing and shaft seal assembly. Since no additional oil lubricating system is needed, Andritz Hydro and WBSEDCL will benefit from a reduction in operational costs, while the maintenance requirement will be optimized with a Thordon shaft seal positioned above the bearing for easier access.